For almost a century and half, the Grand Hotel Plaza has resided in the antique Palazzo Lozzano in Via del Corso, whose design has endured through to the current structure, uniting, in around 1834, several pre-existing buildings in the same area by the architect Antonio Sarti, concluding the project in 1837.

The building was later reinvented as Architect Sarti’s Inn from 1862 to 1863, and it was with this function that it became an example of one of the most antique and prestigious hotels in Rome.

Further construction work took place in 1920s, inspired by the Art Nouveau style in fashion at the time and by the growing importance of the hotel as a meeting place for cultural exchange, in a period where the city of Rome was recognised once again for its role as the homeland of Classics, Culture and the Arts.

In recent years, the name “Albergo Roma” (Hotel Rome) was changed to the more international “Plaza”. 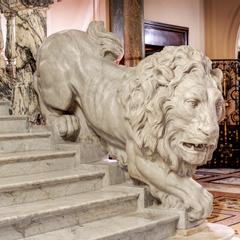 Breathtaking Position
In the true heart of Rome 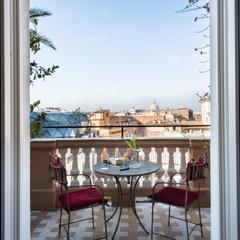 Restaurants & Bar
The wonders of our Chefs 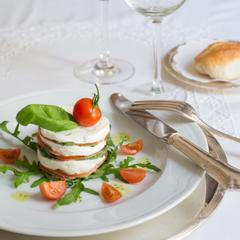 The Plaza Terraces
Immersed in greenery